CCWD Thanks Customers for Conserving Water During Power Outage 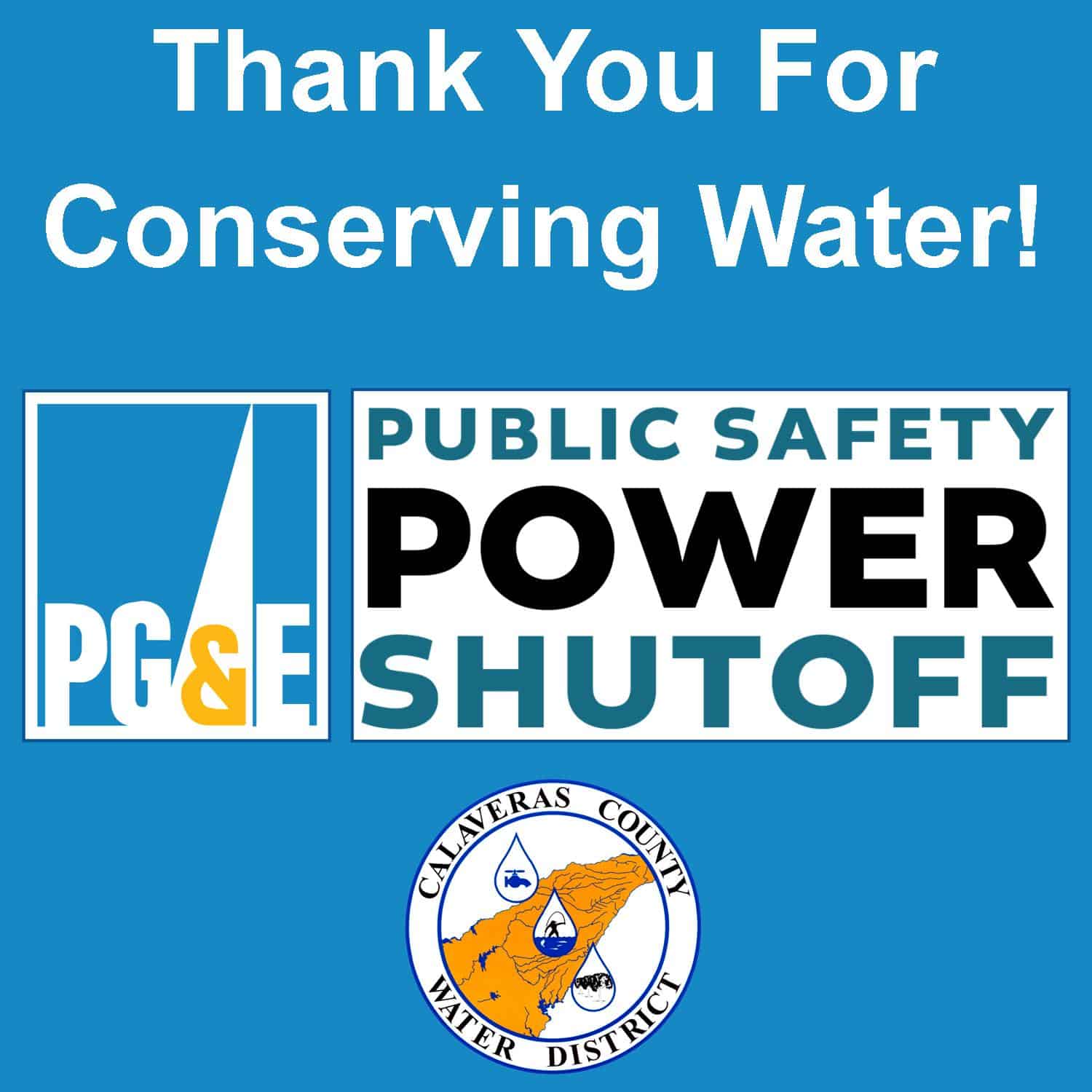 The Calaveras County Water District is grateful to the thousands of customers who conserved water during the recent Pacific Gas and Electric Company’s (PG&E) public safety power shutoff events (PSPS). Now that power has been restored throughout Calaveras County, customers can resume normal water use.

Well in advance of the planned power shutdown, CCWD encouraged customers to conserve water during power outages to reduce the burden on backup generators that automatically kick on when electrical power is lost. CCWD is thankful that customers took the call for conservation seriously and significantly reduced water use during the power outages.

While water conservation should be standard procedure for customers during every PSPS event, there was an emergency situation during the October 10-12 PSPS event that required even greater levels of conservation. The District experienced a major generator failure at its water treatment plant in Copperopolis soon after the power was shut off by PG&E. This failure prevented the water plant from operating, which meant the community was limited to the water in CCWD’s water storage tanks until the generator could be repaired or replaced. The District put out an urgent call for conservation to Copperopolis residents, and the community came through in a big way. Water usage in Copperopolis noticeably declined, and this extended the amount of time CCWD had before running out of treated water. Fortunately, PG&E was able to provide a large backup generator that was hooked up to CCWD’s water plant before the District’s water reserves were exhausted.

In addition to thanking the community, the District also thanks staff for working tirelessly and going above and beyond during this emergency situation. Staff put in a monumental effort to keep backup generators fueled across the county and used their specialized skills to quickly repair generators that failed.

The District applauds both customers and staff’s admirable response to this emergency situation – a response that made a real difference in CCWD’s ability to resolve problems without interrupting utility services through four PSPS events.

For tips on conserving water and preparing for an extended power outage, go to www.ccwd.org/psps. CCWD urges all county residents to be ready for future planned power shutdowns by visiting www.prepareforpowerdown.com. For more information from PG&E on PSPS events, go to www.pge.com or call 800-743-5002.

Search
Recent News
Send Us a Message
If you have a question or concern, please fill out the information below to contact District staff. We look forward to assisting you.
Operations
Go to Top
US POSTAL SERVICE CLERICAL ERROR