CCWD Joined by Community to Celebrate Completion of Reach 3A Project

More than 60 people joined the Calaveras County Water District Board of Directors and staff at Cedar Center in Arnold Wednesday for a ribbon-cutting ceremony to celebrate the completion of the $5.3 million Reach 3A Water Transmission Pipeline Replacement Project, which has been under construction since spring 2016.

To kick off the ceremony, CCWD General manager Dave Eggerton welcomed community members and thanked CCWD staff members, T&S Construction, local, state and federal agencies and local businesses for their help with the project. Division 3 Director Bertha Underhill spoke to the incredible community support for the project, and beamed when describing the long-term benefits the pipeline brings to the community she calls home. Charles Palmer, who is the District Engineer and was the Reach 3A project manager, gave a detailed overview of the pipeline (see details here), and presented CCWD’s contractor (T&S Construction) with a formal certificate of substantial completion. CCWD Board President Jeff Davidson reminded attendees that while elected boards and office staff tend to take credit for accomplishing large projects like Reach 3A, it’s the men and women working in the field that actually get their hands dirty and build the projects – and they should be properly recognized for their hard work. Following Davidson’s remarks, the CCWD Board was presented with certificates of recognition for completing the project from representatives from Congressman Tom McClintock’s Office, Senator Tom Berryhill’s Office and Assemblyman Frank Bigelow’s office. To close the ceremony, the CCWD Board gathered on the freshly paved trench containing the new Reach 3A pipeline, a blue ribbon was stretched tight, and Underhill used a giant pair of scissors to make the cut, with a beaming smile on her face.

“I am so grateful for the community’s support,” Underhill said. “People really appreciate the importance of having a safe, reliable water system serving their community. I thought today’s ceremony was just wonderful.”

“The community has been with us on this project from beginning to end,” he said. “That incredible support has made it possible to complete this critically important project that ensures fire protection and safe drinking water for this community for generations to come.”

This project replaced nearly 20,000 feet of 12-inch diameter water transmission pipeline, which was built in 1965 and had reached the end of its useful life. Over the past several years, the pipeline had developed an increasing number of major leaks. The most concerning of these failures sent a 100-foot geyser of water into the air near Highway 4 on July 4 weekend, 2013. The CCWD Board of Directors put the Reach 3A Project at the top of its capital improvement list. Even during construction of the new pipeline, sections of the old pipeline still in service continued to fail, which caused community members to experience disruptions in their water service. 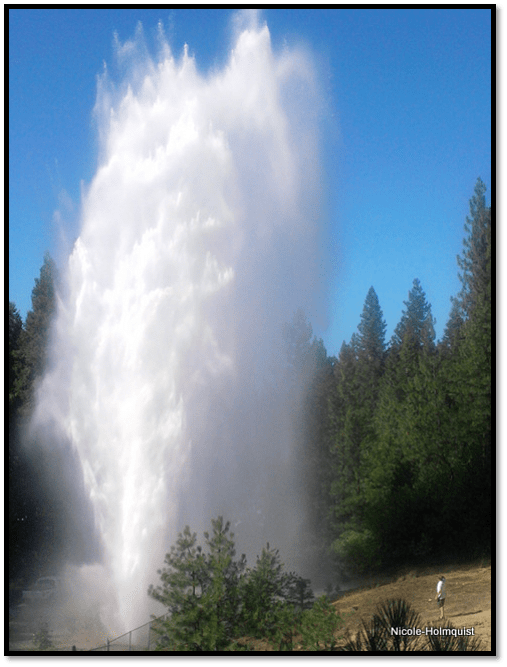 The newly constructed pipeline runs from the Arnold Cal-Fire Station along Highway 4, down Blagen Road and terminates at CCWD’s Sawmill Tank near White Pines. Funding for this project came from a combination of a $1.378 million grant from the United States Department of Agriculture (USDA), a $2.622 million loan from USDA and $1.3 million in local matching funds, which came from CCWD’s Capital Renovation and Replacement fund (Capital R&R). This fund was made possible by rate increases in 2013 and 2014, and the funds from those increases are dedicated solely to making capital improvements to the District’s infrastructure. Construction on the Reach 3A pipeline began in May 2016 and the project was substantially completed on October 25, 2017. The new pipeline is expected to last up to 75 years.

“It was great to recognize CCWD staff members, T&S Construction personnel, local, state and federal agencies, and the leadership of the CCWD Board of Directors that were integral to making this project a success,” Eggerton said of the ceremony. “This project serves as a model for how the District plans to utilize Capital R&R funds to implement capital projects across the county.”

The District is grateful to Arnold community members for their support of this project and the patience and understanding they showed during the construction process.

Those with questions about the project may contact Joel Metzger, manager of external affairs, at joelm@ccwd.org or 209-754-3123.