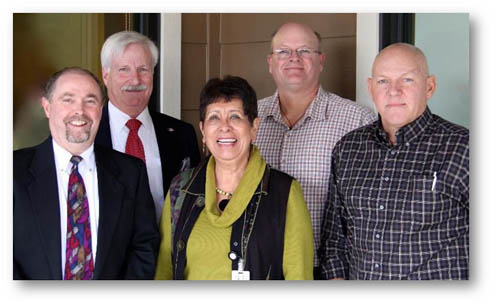 The Calaveras County Water District Board of Directors voted unanimously Wednesday to postpone a rate increase scheduled to take effect on September 1, 2015.

At the request of the Board, CCWD staff spent the past several months examining the Capital Renovation and Replacement Program, which is funded by revenue generated by rate increases in 2013 and 2014. After a detailed analysis of infrastructure projects and finances, staff recommended suspending the 2015 rate increase.

“When we went back and evaluated these projects, we looked at the necessity of each one along with the funding mechanisms and realistic timelines,” CCWD General Manager Dave Eggerton said during Wednesday’s meeting. “The revised project list we are presenting is composed of absolutely vital projects. There is no fluff.

“This is a balancing act,” Eggerton continued. “We are weighing the risks associated with our aging infrastructure along with strong direction from this Board to provide some financial relief to our customers.”

Eggerton emphasized that the last thing he wants is for the District to be in a position where it cannot provide safe, reliable services to its customers due to failing infrastructure. Without adequate funds for the Capital R&R Program, Eggerton said
District systems may experience catastrophic failures that could cause the District to incur excessive costs for unplanned, emergency projects.

“There will always be projects and thing are always going to break and we’re never going to collect enough money to satisfy it all,” said District 5 Director Jeff Davidson, who cautioned other Board members that decreasing rates could be a bad move. “I’m afraid that we’re going to get to the rest of these projects, and we’re not going to have enough money. I hate to be so dependent on grant funding.”

Davidson also expressed concerns about the District’s income to debt ratios along with an anticipated decrease in water sales due to the ongoing drought.

Jeffrey Meyer, CCWD director of administrative services, told the Board that the income to debt ratio should be fine with a rate postponement, but any decreases could put the District out of compliance with grant application requirements.

District 4 Director Dennis Mills said he was in favor of decreasing rates and tasking staff with finding more grant opportunities, other sources of revenue and identifying savings in the operating budget.

That said, Mills said he was supportive of the rate postponement “for now.”

Board President Bertha Underhill said that she believes CCWD ratepayers understand that rates had to be raised in 2013, but the rate hikes impacted customers more than anticipated.

“Just like all the rest of you directors, I can’t go to the post office, get gas or buy groceries without hearing about these rates,” Underhill said, adding she initially supported lowering rates but after seeing the financial analysis she was supportive of postponing the 2015 rates and reevaluating next year.

Eggerton assured the Board that the Capital R&R project list and rates will be brought back to the Board for reevaluation regularly in the months and years to come.

For updates on CCWD’s Capital R&R Program, go to www.ccwd.org or www.facebook.com/calaveraswaterdistrict.