The Calaveras County Water District Board of Directors presented Bill Perley, director of utility services and engineering, with a resolution honoring him for his 13 years of service at a Board meeting in December. Perley will officially retire on December 30, 2015.

Read the full Board resolution here.

Over the years, Perley has served as chief of maintenance and operations and maintenance superintendent among other roles. No matter the project or emergency, he always came up with a plan that overcame the challenges and allowed the District to continue providing reliable water and waste water services to customers. He has been a great asset to the District during his tenure. Members of the Board recognized his talents when presenting the resolution.

District 3 Director Bertha Underhill said she was on the Board when Perley first came to CCWD and she was immediately impressed.

“When he brought his experience to CCWD, we were blown away by where this fellow has been, who he’s worked with and what he’s done,” Underhill said. “What he’s done for CCWD will never be repeated. I want to say, Bill, how much you are certainly appreciated.”

District 1 Director Scott Ratterman thanked Perley for his many years of service.

“You’ve been an integral part of this district,” Ratterman said. “There’s not a guy who knows more about all of our systems than you. And I know you will be sorely missed.”

District 5 Director and Board Vice President Jeff Davidson said that he always appreciated that Perley would speak the truth to the Board and back it up with facts.

“You’re an example for all staff,” Davidson said. “Over the years, you’ve been the stable force here when we’ve had …. You’ve always been someone we could trust and tell us the truth… I just think it’s really important that people recognize the leadership that you’ve provided. You’ve done it with humor. You’ve just been a joy to work with all these years.”

District 4 Director Dennis Mills said that as a new member of the Board, he appreciated Perley taking the time to bring him up to speed.

“You’ve taken the time – even when you were busy – to explain and to offer suggestions and have open conversations when needed,” Mills said. “That’s difficult in the busy world we live in. It’s not an easy job but you’ve done it well. Good luck.”

“Saturday, Sunday, Monday, midnight, it didn’t matter,” Strange said. “You made sure whatever problem or issue was taken care of.  Again, your skill set, knowledge and abilities are something this District will sorely miss for many years into the future.”

Dave Eggerton, CCWD general manager, thanked Perley for being “incredibly supportive” adding he was grateful for the leadership that Perley has provided, especially during the recent Butte Fire. 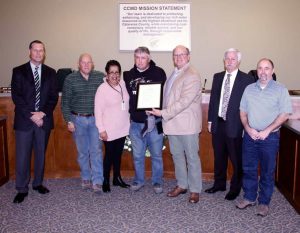 The CCWD Board of Directors and general manager present Bill Perley with a resolution honoring him for his 13 years of service. 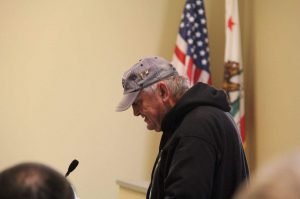 Bill Perley addresses the Board during the presentation of an honorary resolution.